How the droogs look in A Clockwork Orange came about:

I was over at [Kubrick’s] house, you know, looking for stuff to do. And I didn’t like anything there, really. They had a big box of hats, some with feathers. I thought that was pretty lame. So I say, “Look, I’ve got my Cricket gear in my car.” So I went to the car and got my Cricket gear. And he says, “Oh yeah, I love the white.” And so I put it on. And he goes, “Oh put the protector on the outside.” And I went, “Great idea.” So I wore the protector on the outside like a codpiece. He goes, “This could be like the middle ages. I like this look.” And that’s how the look of the Droogs came; because I had my Cricket stuff in the back of my car.

via Malcolm McDowell and Leon Vitali Interview A CLOCKWORK ORANGE. 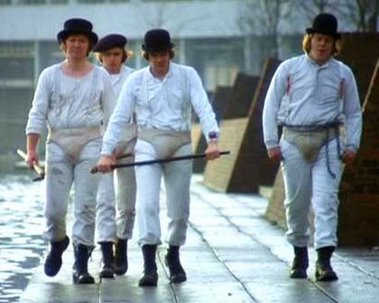