The iPad, the World Cup and a Baby: A Story of Cricket-Life Balance

This World Cup was unlike any other. I told part of the story at the end of yesterday’s BoredWaani podcast on experiences watching cricket in the US, but wanted to elaborate below.

Reason #1: The iPad
Willow TV streamed the games to all kinds of Internet-connected devices. I could switch from my iPad, to my iPhone to the Roku-connected TV and the game was on.

Reason #2: The Baby
My wife and I had a baby 5 months before the World Cup began. So the 5am starts weren’t an issue; one of the three of us was bound to be up at that hour.

So here we were: a cricket-loving couple with a 5-month old that was a higher priority than the World Cup. Sachin Tendulkar may be God, but his smile doesn’t make grown men weep. Just the way it is. His backfoot punch past the bowler, on the other hand…

This is where the iPad came in: we watched more cricket on the iPad than on the television. At 5am, without getting out of bed, we’d reach over to the iPad on the nightstand and flip it on. One ear bud in my wife’s ear, one in mine, drift in and out of sleep, sometimes with the baby sleeping between us.

As the day would begin: the baby’s playing in her room, Tendulkar’s playing on the iPad in a corner. We’re changing the baby, Ponting’s lying on the changing pad next to her. The baby goes to sleep, ear buds to hear Ravi Shastri. 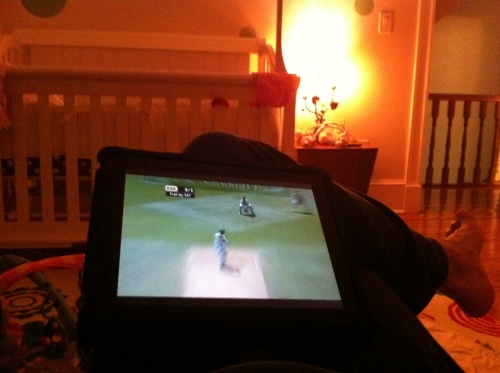 The Pleasure of Cricket While the Baby Slept 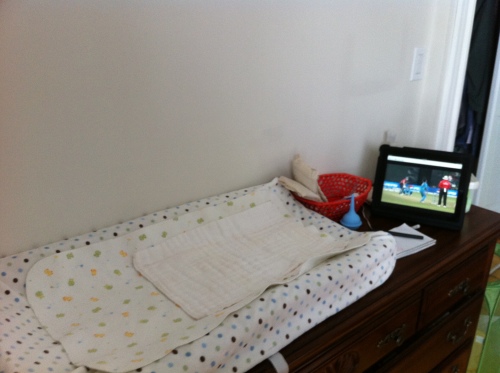 The Pleasure of Cricket While Changing the Baby

2 Comments to “The iPad, the World Cup and a Baby: A Story of Cricket-Life Balance”