The History of One Day Cricket: Part I

The One Day International has changed dramatically in its 40 years of existence. Here is part one of my analysis of the game:

Highest Score per team, per year

Take a look at how Jayasuriya and company changed the game in 1996. It’s an outlier, so different from the years around it and wouldn’t be surpassed until the batting powerplay was instituted in 2006.

Highest Score of World Cup 2011: 375 by India against Bangladesh

High Scores in One Day History (click for larger version)

Runs per over per team, per year 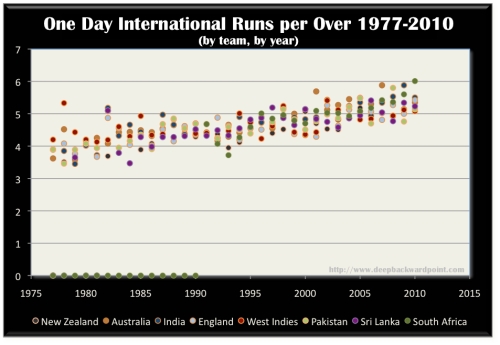 Runs per wicket per team, per year

Now here’s something that hasn’t changed much as the game has changed. Even though teams are scoring at a (much) faster pace, the runs per wicket has been largely steady. Barring some outliers (West Indies in the early days, Australia in the last 10 years), the average has barely increased from the upper 20’s to the low 30’s.

Also, look how the mighty have fallen. West Indies dominates every chart here for the first decade and then drops off the map. Finally, the era of Aussie dominance ended in 2008- the orange dot on all three charts falls from the top that year.

In the next installment, I will present three charts on how the balance of power in one day internationals has changed over 40 years.

5 Comments to “The History of One Day Cricket: Part I”